THE MAIL-INTERVIEW WITH MIKE DYAR – USA 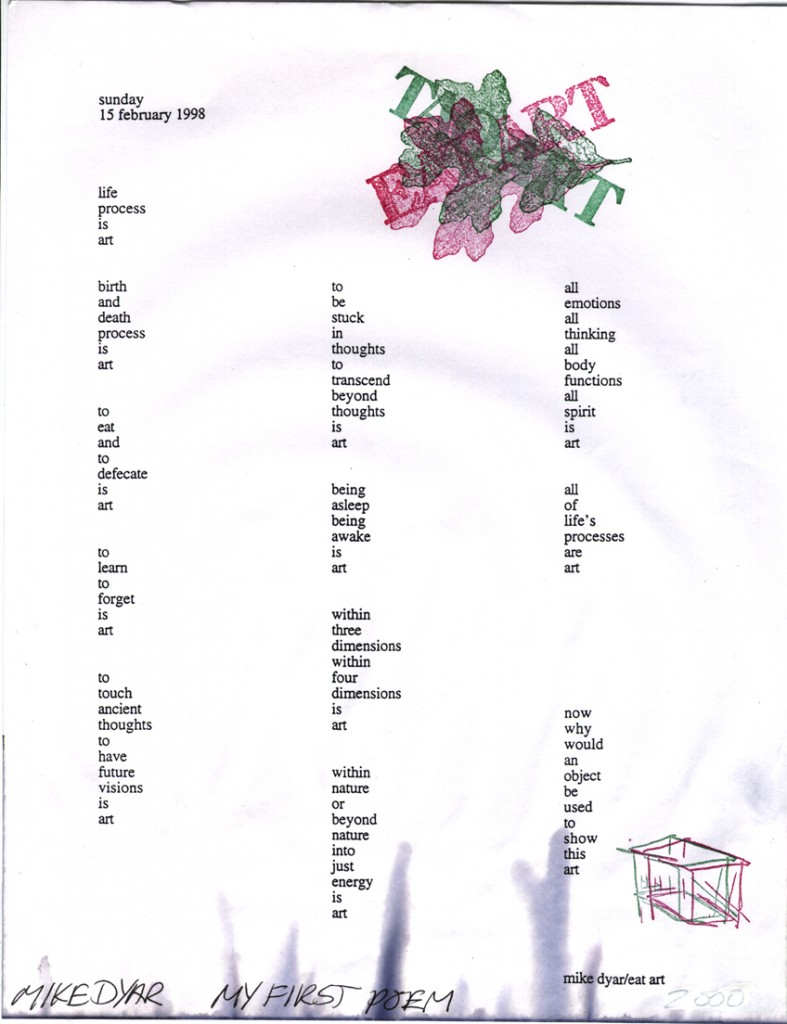 (On this day I went, together with Picasso Gaglione and John Held Jr., to Tom Marioni’s place. A nice surprise was to meet Mike Dyar there. I asked him if he would like to join the mail-interview project, and he said yes. I sent this question later that evening from 24th Street in San Francisco to Mike Dyar.)

RJ: Welcome to this mail-interview. First let me ask you the traditional question. When did you get involved in the mail art network?

(On this day I gave a lecture about the TAM Rubber Stamp Archive at the Stamp Art Gallery on 8th Street. Mike was one of the visitors, and he gave me an envelope with his answer that I later read in San Rafael, where I was visiting Barbara Cooper.)

MD: When I graduated from college in 1974, I knew I wanted to push the limits of art and the system that showed it. I was living in Dubuque, Iowa, a small town about two hundred miles outside of Chicago. Dubuque had no art that would push me, so about every other month I spent a weekend in Chicago. I viewed shows and picked up books on conceptual art or unusual art at the time.

I bought a book by Michael Crane & published by his Running Dog Press. I was moved by it. It seemed to disconnect with just about everything in art. In the book, he asked for artists to send a page to him for his next book. I sent a photo of my head & cut hair from a piece of body art I was doing at the time. When his book came out in 1975 with my work in it, I was immediately connected with the concept of mail art.

(The next question I wrote on 28-10-1996, and I mailed the card just before I entered the Art Institute in San Francisco where I would attend a lecture by Tom Marioni. To my surprise Mike was also there and while sitting next to him I wrote a copy of the next question on a brochure I picked up somewhere.)

RJ: You say the book connected you to the concept of mail art. Did it also connect you to mail artists! Who was out there in 1975?

(The next answer I got via Diana Mars. I visited the party she gave in honor of me on Wednesday 30-10-1996. I had just returned from my visit with Patricia Tavenner in Oakland. I left early and traveled with Tim Mancusi and missed Mike Dyar by just 10 minutes. So he couldn’t give the next answer in person, but Diana kept the envelope and gave it to me on November 2nd at the Stamp Art Gallery on 8th Street, just the day before I went back to Europe.)

MD: Enclosed is the introduction page by Mike Crane, the names and addresses of the list of artists in his book & my page, which became my first piece of mail art. As I stated above, this book connected me to the mail art world & the list of artists included in his book were the players in 1975. I selected thirteen people to establish an art correspondence with: Paulo Brusky, Frank Ferguson Sirq, Clemente Padin, Bill Stipe, Ken Friedman, Len Hollywood, Leonhard Frank Duch, Klaus Groh, Al Whitson, Opal P. Nations, Chuck Stake Enterprises, Endre Tot, & of course, Michael Crane.

RJ: Your name stamp doesn’t just state your name but always has attached to it “EAT ART.” What is this all about?

MD: Why EAT ART? I did not want to use my name. I wanted to lose my “name” identity (Mike Dyar) & come up with a mail art name that represented my art and myself at the time (1975).

Food has always been important to my life—food is for life & thought—so I came up with EAT ART—food for conceptual thought.

RJ: Besides the stamp EAT ART, I also see the stamps TAO ART and ZEN ART on your mail. Did your interest in Taoism and Zen start after EAT ART or is this already part of your life for a longer time?

MD: My TAO, ZEN, and ARAB art stamps were made years after my EAT ART stamp. I have been studying the philosophies of all three traditions for years. After a while, I realized they had always been a part of my life. I understand this to be awareness.

RJ: Awareness of what? Can you explain this to a person that hasn’t studied the three subjects you mentioned?

With his answer, Mike included a copy of Cage in 1989, with the text, “formally trained Zen Buddhist that he was.”

• There are many books on or about this word—Awareness—but all of these books and all of their words are meaning-less.

• An answer to your question would be meaning-less to everyone.

• To understand awareness, one looks deeply into one’s own self.

• Not the un-self of conditioning from family, friends, society / culture

• But into the true self we all reach when we open up to the creative act of art—music—writing—life.

MD: Since 1975, I have always responded to each and every piece of mail art that I received.

In January 1996, I was in a bike accident and suffered from a major concussion. But now, at the end of the summer of 1997, I am starting to get back to my ritual of solemn ceremonial mail art practice.

I would like to ask you a question. What is your opinion or understanding of my answer to your question about awareness?

RJ: You are not the first to try to ask questions to the interviewer. Awareness. I know that most of the questions I am asking are a reflection of a search. Not just a search of what mail art is all about, but what actually brings mail art into my life. I am aware of Zen and must confess I never really read anything about it. I do know that inside every person there are powers that can be revealed when one isn’t doing things people ask you to do. Just do the things you feel you have to do, and that could start something surprisingly new.

Not really an answer, is it? But I would rather go on with asking questions to you. Is answering mail art like a ceremony to you? How does this ceremony go…?

MD: My process of making mail art is a ceremonial practice…the making of the envelopes, stationary, pieces to be mailed—this whole methodical process.

P.S. Another question for you. Can you put that sticker (the one that you sent to me with your question) on a specific place in the fourth dimension?

RJ: Of course. In 1977, when I studied Technical Physics at the University of Eindhoven, I followed the special introduction-course “Special Relativity by Einstein.” For me this way of thinking is not that difficult. When I put the two dimensional sticker on an object (three dimensional), and send it to you, it automatically becomes four dimensional. The place the sticker will be varies with the time. And even when the sticker would be at a fixed position on Earth, the Earth itself is moving, etc. This fourth dimension, e.g. the time factor, could be the thing that fascinates me so much about mail art. I make something, and after putting it in the mailbox, I can’t control or alter the mail art anymore.

(Like most of Mike’s letters, he writes the words in lines but one word below another. This makes the letter look like a piece of art itself.)

MD: The reason I make art is to experience the creative act and to communicate with nature, others like you, and myself. Your thoughts and work are very similar to my thoughts and work. Your answers show this clearly.

But an interview without open communication would be difficult because I am not into self-promotion.

You and I are doing this interview so that we can both get to the truth of the creative act—to go beyond the three dimensions into a fourth dimensional continuum.

Yes, your questions are answers and not just questions.

RJ: Yes, what you say is true. This “self-promotion” is seen in some mail artists. They spend so much time on this that they forget what makes an artist an artist. To create things, to react to what you see, feel, hear, etc. To be open to influences from outside and to let others see what is inside oneself.

Well, just a short reaction to your words. I don’t mind that an interview becomes a dialogue. It took me some time to come back to you with a question. Time is an essential part of these mail-interviews. What did you do today, Mike?

MD: I retyped the first poem I’ve ever written. This is what I did today.

(Mike sent a print of the poem with his answer.)

RJ: Is art not the mystic voyage of discovery, but its wake?

MD: Ruud, my question was for you and you alone, but here is an answer to a question unasked…

I started playing chess when I was five. I didn’t learn to become another Duchamp, but to be good enough to give him a good game when we meet sometime in the future…

RJ: This reminds me of a discussion I had some time ago. Some artists want to become famous and direct their energy to that, instead of just working on producing good art. In a way they destroy their possibilities of becoming a good artist because they spill their energy on something unimportant. Duchamp never wanted to become famous but maybe therefore became famous. Do you like Duchamp’s work?

MD: Duchamp’s work is very Zen. His works are koans to be figured out inside the self of the viewer. Not an object to just be viewed. What are your thoughts on Duchamp?

RJ: I like original concepts in art, and Marcel Duchamp certainly had a few of those. On the other hand, I hate it when today’s artists start to copy the concepts and try them again. I guess a lot of the art that is produced today is just a reproduction of what already has been done before. It is difficult to do something new. Are you trying to do something new, Mike?

MD: I could fill pages on what I am doing / working on / trying to understand. Mostly, I try to work on / understand the process of new & original art for myself. Duchamp & Beuys were masters walking down the path of their discovery.

I thank them for showing & putting me on their paths, but death stopped them. Looking into my life has allowed me to walk down these paths. Down their paths into my path & my path is always new to myself. R.J., do you find time to let go of mail art & look down & walk you path?

RJ: Yes, I am gradually going in that direction. The mail-interview project is coming to an end soon and somebody else might take up the task to document things. It is also time to end this interview, Mike. Did I forget to ask you something?

(With this next question, I sent Mike the complete text of the interview)