Ryosuke Cohen has been doing his Brain Cells since 1985, and this year the 1000th issue is expected. I estimate that I have about 400-500 of his Brain Cells in the TAM Archive, including that very first one also. Today I decided to write him a letter and use the typewriter for that.

Because Ryosuke always chooses an image for including on his Brain Cell I always make sure he has a lot to choose from on the enveloppe. The traditional envelopes are made as I print stamps from the TAM Archive on a regular basis to send the collection back into the network in a printed form.

Because I know De Vilo Sloan now for quite some time, I always like to surprise him with some new mailings that I also document. Normally I don’t publish the straight away on facebook of the IUOMA network, because he is there too and the surprise would be spoiled. This blog isn’t often visited by the network. It is more of an archive that is picked up by Google and hopefully will stay alive longer since I pay for the hostig myself and use the main domain name http://www.iuoma.org which is already quite old.

For the letter to him I use a print of an in-between version of a drawing I made. Because I scan the works I make, and also save in-between versions, thay are pinted out also, and used as a writing paper like this. I stamped randomly some words in it to add to the letter and used a bit the chaos-theory where the colour was more important then the words.

The large “appoved’ stamp I used to set the date as well, but I already did that when I used the working typewriter I have here in Breda when I started writing the note to De Villo Sloan. The envelope this letter goes into is an acrylic painted envelope. Will fit nicely in the collection De Villo already has of me. Somehow I like it to when the envelopes are a bit concentrated on several places.

Some samples of mail-Art that went out in September 2017:

In 2017 I got these catalogs of Mail-Art project in the mail. Above a project done by the Stickerdude (Joel Cohen) in NY – USA, and below two catalogs that Uli Grohmann (Germany) did. Although a lot goes digital thee days, the hardcopies are still my favorites. You can go through the pages, and digitize them, but the booklet will survive the times for sure whuile the digital images go into the websiotes and social media and somehow are difficult to find after some time….. 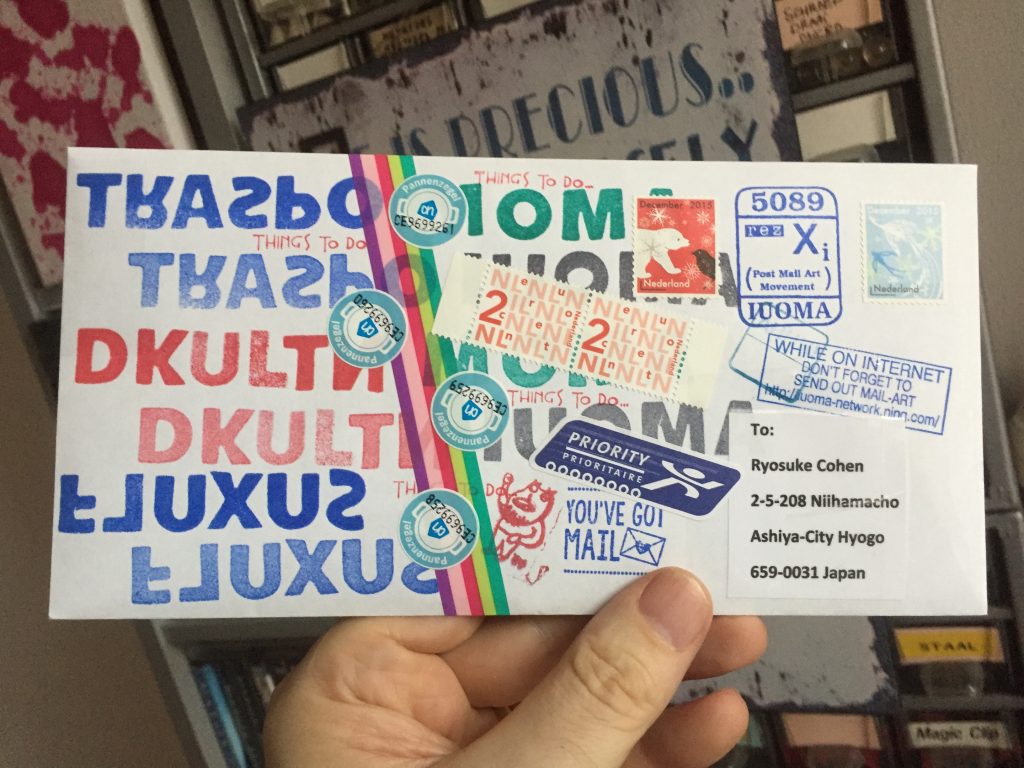 Because the Stickerdude sent me two wonderful stamps I worked on a special enveloppe for him which will go out today. Off course I used the new rubber and also some old rubber to illustrate the letter. The new rubberstamps will be very usefull and work well with the other play.

Here is a photo of the letter I wrote: